Last week I hosted my book group meeting (where we discussed ‘Brave New World’ as mentioned in a previous post). A lack of planning on my part, plus the limited stock at our village shop, meant I had to conjure up some snacks. As well as saving money by using what I already had, I also felt some satisfaction in knowing my nibbles were plastic free. 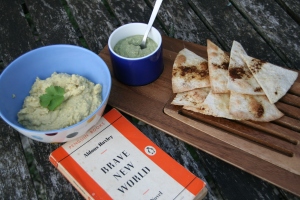 I still haven’t perfected the recipe for making hummus at home. I didn’t have any tahini so had to make it up a bit. The ingredients were: garlic, olive oil, lemon juice, chickpeas ( which I had previously soaked, boiled then frozen – or you could use a can), and a little water to make it smoother. I whizzed these all up in my hand blender and seasoned with salt and pepper.

I came across a recipe for this a few years ago and, as I had quite a lot of broad beans in my veg box, decided to make a summery version of the classic dip. The recipe I used is here. I boiled the beans then whizzed up with garlic,salt, olive oil and a little cooking water. The hummus may look a rather unpleasant shade of green, but it tastes really delicious.

I have used this recipe a few times. It originally came from ‘Healthy Food’ magazine. The homemade chips are healthier because you only add a little oil and your own flavourings to them.

Cut the tortilla wraps into triangles, brush lightly with oil, add a little chilli powder (although I suppose you could add sea salt) then bake in oven (200C/180C.GM6) for 3-4 minutes. It’s more time consuming than opening a bag (and the tortilla wraps originally came wrapped in plastic) but it’s healthier and way more satisfying.

One thought on “Plastic free snacks for book group”

Leave a Reply to Danielle @No Need For Mars Cancel reply

This site uses Akismet to reduce spam. Learn how your comment data is processed.

Musings of a mid century girl