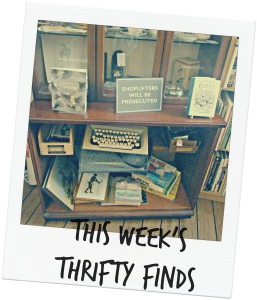 Welcome to my third week of Thrifty Finds. I would love to hear about any of your Thrifty Finds over the past week – or things you didn’t buy (I hope you were more restrained than me in buying that £15 candle!)

This past week’s Thrifty Finds started with a rather large purchase. It came second-hand and was bought for a relative good price. It also ends a six week episode in our lives which has been rather scary…..

All my other Thrifty Finds seem quite small in comparison but..

2. I made my own blackberry cordial which I am rather proud of:

3.  We resisted to urge to get fish & chips on one evening, and instead cooked at home. I continued to bake bread and even had a go at making a fruit cake in the breadmaker, which turned out well.

4. I went to a fundraising coffee morning and picked up a wonderful raspberry and coconut cake for £2.

5. I mended an item of child’s underwear, rather than throwing it away – which would have been far easier.

What were your Thrifty Finds for the past week?

Last week I picked quite a few blackberries. Having already frozen a batch and made a couple of crumbles, I thought I would try my hand at making blackberry cordial. Like elderberry cordial, this is meant to be high in Vitamin C and good for colds and sore throats.

I took the recipe from the wonderful ‘Festivals, Family and Food’. Published by Hawthorn Press this has been a staple in our house for many years. It is divided into seasons and features stories, recipes and crafts to celebrate the different festivals and rhythms of year. I particularly love the pages on Autumn and Harvest.

I followed this recipe for the cordial. The book is quite dated so it still gives imperial measurements. As I didn’t have 2lbs of blackberries I had to do some rough calculations (remembering that there are 16oz in 1lb which, for a metric-bred person like myself, I find confusing!)

Anyway the recipe is really easy to follow. Basically, you just soak the berries in a quantity of white wine vinegar and leave for seven days, stirring occasionally.

After seven days, strain the berries. Boil the juice with lots of sugar and honey. Leave to cool and then pour into a bottle. The cordial can then be stored in a dark cupboard.

The cordial tasted fine. Next year I’m going to pick a lot more berries to make a few bottles that will see us through the winter. I think I would also replace the white wine vinegar with apple cider vinger which is meant to have more healing properties.

Have you ever tried making your own cordial, or using blackberry or elderberry cordial to soothe colds?

So, welcome to the second installment of This Week’s Thrifty Finds.

This past week my Thrifty Finds have been: 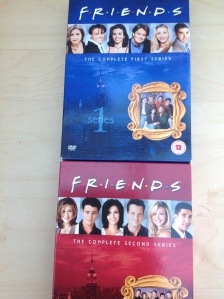 2. I donated a bag of children’s clothes to the Air Ambulance donation bin at school:

3. It’s been a good week for getting food for free. I picked some apples and pears from our small trees in the garden. I enjoyed blackberrying around the village and also helping myself to some apples that were left for free outside a couple of houses.

4. We used up all our leftovers in one of our meals this week.

On a not so great note I found myself spending £15 on something I didn’t want and definitely didn’t need! I went to a candle selling party at a friends and, despite going with a set budget, found there was nothing I could buy. So I ended up getting a candle for £15. It wasn’t even a soy candle which at least would be slightly better for the environment. Does anyone have any tactics for going to parties like this? I really wanted to support my friend and did have a good evening. I just didn’t want to appear ‘tight’ by not buying anything at all.

What were your Thrifty Finds for the past week? 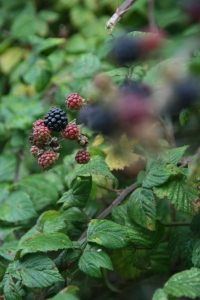 These past few weeks I have been spending some time outdoors picking blackberries. Blackberry season is one of my favourite times of the year and is so evocative of my childhood. Whenever I start to pick the berries from the hedgerows, I am reminded of my Nan who, even when she was in her late eighties, loved to go blackberrying.

My children sometimes come out blackberry picking too and we seem to have collected quite a haul already this year. Earlier this week I was on my own, blackberrying, when an old man told me you shouldn’t pick them after 1st October because they will have ‘devil’s spit’ on them.

I’d always thought you couldn’t pick the berries after the first frost but I went home to look up this piece of folklore. Apparently on Old Michaelmas Day (which was 10th October*) Lucifer was expelled from Heaven. He fell from the skies and landed on a blackberry bush. He cursed the fruit and spat on it (hence the ‘devil’s spit’) and made it unfit for eating. So, according to tradition, blackberries shouldn’t be picked after this date. However other advice I have looked at says they are fine to pick until November – it’s really common sense anyway as to how they look and taste. I do like this piece of folklore though.

Following our successful hauls we have made crumbles, frozen a batch of berries and I am now trying to make blackberry cordial, which is meant to be good for winter colds and sore throats.

I’ve also picked up a few apples from the many ‘help yourself’ containers that people have left outside their houses.

What hasn’t been so nice, though, is finding other items when out in the lanes blackberrying, like this plastic packaging I found by a field (not such a great harvest):

This autumn’s fruit harvest, though, seems to have been quite a good one and, despite the ‘devil’s spit’ I’m going to keep on picking blackberries for a little while longer…

Have you been blackberrying too?

*Michaelmas Day is now on 29 September