This past month I’ve noticed a few more charity shops selling second-hand records. I’m not sure if this is because they received a bulk donation or if more shops have noticed there is a market for old vinyl. Either way I’ve become the lucky purchaser of a few gems (in my opinion) and all at a bargain price.

I picked up this single from Alison Moyet for just 50p at the British Red Cross shop in Bath: 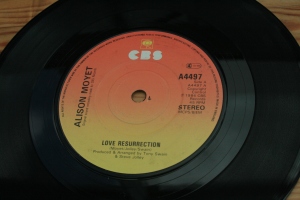 Then I spotted these three albums in a £1 bargain bin outside a charity shop in the town where I work: 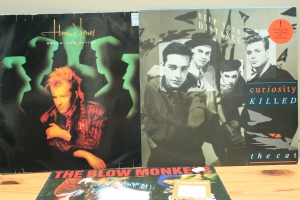 The Howard Jones album is from 1985; Curiosity Killed the Cat is from 1987 (I had the cassette version of this album) and the Blow Monkeys’ singles collection is from 1989. There’s also been an interesting BBC Series about pop and fashion which should still be available on i-player. The last episode of ‘Oh You Pretty Things’ focused on the 1980s and, in particular, the style of the Blitz Club/New Romantics, OMD, Duran Duran and – later on in the decade – Soul II Soul. So these albums are the perfect musical accompaniment.

As a way of closing the loop of purchasing and donating we also freecycled our old record turntable which was useless to us without amp and speakers but went to a good home where vinyl is once more being played.

Just a couple of things I noticed that are happening in a charity stylie this coming week:

This week (5-11 May) is British Red Cross Week. The charity is one that is familiar to all of us and this week it is asking people to go all out to raise money for its charity which helps people in crisis.

This Thursday (9 May) is Oxfam and Marks & Spencer’s ‘One Day Wardrobe Clear-Out’ which invites people to go through their wardrobes and drop off unwanted clothes at participating M&S stores. In return everyone who donates will recieve a £5 voucher to spend.(Restricitions apply as you have to be spending £35 or more to get the £5 off and it has to be used by 20 May. Maybe it’s just better to donate the clothes and feel good enough about that).