A few years ago I acquired this rather odd-looking fabric, straight from the 1970s:

Despite its strangeness it does have a sentimental attachment as it once belonged to a travel cot my brother slept in as a baby in the mid 70s. When my parents got rid of the cot I kept onto the fabric and, for the past few years, have been racking my brains as to how I can use it. I really wanted to create something to pass onto his children as a – sort of – family heirloom. This Christmas I finally came up with a solution as my little niece has recently acquired a Build-a-Bear. After some pinterest research and a fair bit of making it up myself I produced a sleeping bag and matching pillow for her bear (unfortunately I forgot to take a pic before wrapping it up). I quite like the fact that the material that was once used when her daddy went camping can now help her toys have a ‘camp out’ too.

Using this fabric also got me thinking about other odd 1970s pieces that I have used, taken from a decade where unsettling and oddly coloured patterns seem to have been de rigour. In fact the orange shades of the above fabric remind me of the slightly trippy hues and effects from the Willy Wonka film (which both delighted and scared me as a small child).

A few years ago I acquired some second-hand fabric featuring animals in the 1970s shade of brown. I turned them into this cushion cover and this peg bag: 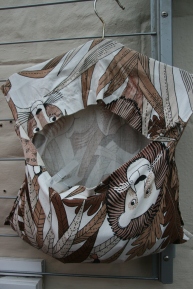 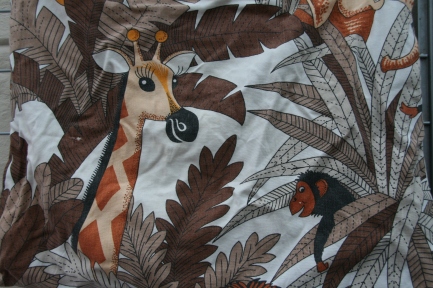 Afterwards a friend noticed the cushion and remarked that she had once had a pair of curtains in the very fabric!

I am sure that somewhere in a charity shop is the Magic Roundabout fabric that my aunty made curtains and a gym bag from. Alas all I have now is this Magic Roundabout mug, picked up from a jumble sale about twenty years ago:

Are there any fabric patterns from your childhood that both delighted and unsettled you? How would you feel if you were reunited with it once more?