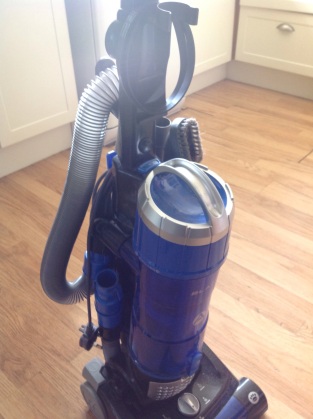 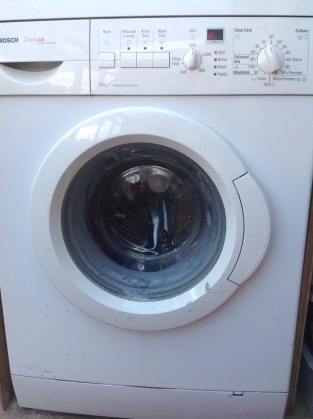 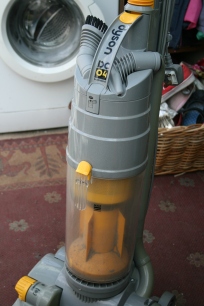 If you have dipped in and out of this blog over the past couple of years you will no doubt have come across my (endless) posts on broken appliances (!). So far we have:

– had a broken cooker which was mended here

– a tatty sofa which I had rather badly mended here

– hoovers which had been repaired, replaced with second-hand, then finally bought new last Christmas

We were fortunate enough to receive some money the other month and, at the same time, three of our appliances died on us:

After fifteen years of service and a professional repair two years ago the cooker finally gave up the ghost two weeks ago. By the time of its demise both ovens had stopped working effectively, the gas ignition had died long ago and only two gas hobs actually worked! So we decided the time had come to buy a brand new one.

The washing machine has been with us for about ten years and with three children it has had its fair share of use (especially when the girls were in cloth nappies). I have a fantastic contact in Bath who has come out on many an occasion to fix it when it stops working. Two years ago he replaced the brushes and said he thought the time would soon come to replace the machine. However it has carried on working (despite getting ever louder and starting to move about in its old age). Last week, after our big camping trip, it stopped draining but my handy washing machine man came and replaced the pump…and it’s working again….! 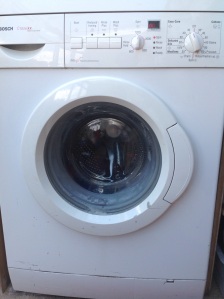 What a saga! We have mended two hoovers, lived with a rubbish (cheap) one and, last month our new hoover broke  and needed a new belt and brush. I’m sure we are cursed by vacuum cleaners (or maybe we live in a dirty house that tests the endurance of even the most powerful machine!). Anyway a call to the manufacturer has resulted in a new supplies of belts (we had to pay) and a free brush. So, fingers crossed, a quick mend will result in it working again.

Running a regular Repair Cafe at my work I see the amount of (electrical) appliances that come in that are so easily fixed. Vacuum cleaners are definitely one of the most popular ones.  WRAP (Waste & Resources Action Programme) undertook a study of one thousands consumers in England and Wales in 2012/13 to assess what people understood about the lifespan of electrical appliances, and if this was important to them. From the study it showed that consumers expected:

There’s also an interesting BBC article here about the decline in the lifespan of white goods in the UK. Apparently washing machines used to last for ten years and now, on average, they last for seven.

So how are your household appliances doing? 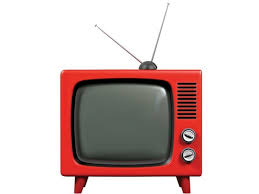 There’s a couple of tv programmes that have caught my eye recently. They are the three part BBC documentary: ‘The Men Who Made Us Spend’ and Channel 4’s ‘This Old Thing’ with Dawn O’Porter [both still available on iplayer/4OD)

At first they may sound unrelated. One is a serious philosophical and historical investigation by Jacques Peretti into, basically, how we are manipulated into buying things. The other is a more lighthearted look at second-hand fashion (or that dreaded word vintage). But I think they also complement each other.

The first episode in Peretti’s documentary looks at ‘planned obsolesence’, where goods are designed so that they can’t be repaired, or we are made to desire a newer version. In one scene he interviews a man who has been queuing outside an Apple store for hours  so that he can buy a new iphone 5 because it comes in a different colour.

Having written before about Fast Fashion I think that planned obsolesence is built into this industry too. We are marketed to so that we want new fashions every six weeks. In ‘This Old Thing’ Dawn O’Porter meets people who buy so many ‘fast’ clothes that a) they don’t  wear it all and b) they keep seeing the same outfits on other people.

All participants baulk at the idea of even considering second-hand (sorry vintage) clothing as an alternative to the modern throw away fashion. However by the end of the programme Dawn has persuaded them to give it a try. There are some nice touches too such as a mending and upcycling workshop with advice from experts, and a brief summary of a fashion period.

I also like the clothes Dawn wears and believe this is a very personal quest for her too. I love her take on the fact that every item has a story to tell and there’s a very nice touch when she re-introduces an outfit once worn by an older member of the family to the participant. And, like any good ‘change your life’ programme there are some tears.

It has certainly inspired me to try some specialist vintage shops although my only criticism is the cost of the clothing. If we really want to persuade people to eschew Fast Fashion and try something second-hand then I believe the price tags should match those of some High Street stores. But that’s probably a post for another day….

I recently had a clear out of the girls’ bedroom and, to my horror, discovered this collection of old  mobile phones that they play with:

Okay, so the bottom  two aren’t ‘real’ and the others are all obsolete so they can’t call or text their friends with them (although my six year old did say ‘lol means laugh out loud’ yesterday (!?). However I was slightly unsettled by the number of unwanted phones we have. While Phil has a Blackberry I am still smart-phone-less and rely on a rather basic Nokia one that does take pics (purchased from a friend so I guess second-hand). I have been toying with the idea recently of getting an i-phone or something similar to make it easier to pick up emails etc. But do I really need it and who says I have to have one?

I confess to being somewhat of a Luddite when embracing new gadgets, although we did purchase an i-pad at Christmas as a family present which I have become a convert to. I am obviously able to work my way round a computer somewhat by creating this blog, becoming addicted to Pinterest and occasionally checking Facebook. I’m not sure where this rambling is heading to. When faced with waste like this it does make me feel uneasy. Once again I also come across the term planned obsolence. I also wonder what it teaches our children about having to have things (my 11 year old claims she is the only one in her class not to have a mobile phone although I question that).

Anyway the phones are off to the Post Office to be recycled.

I do believe that the act of repairing fits into the ethos of my blog which is all about second-hand living. I posted previously about picking up a second-hand breadmaker for a tenner (which is still serving us very well). I think this dovetails with the idea of repairing things that have been broken because both acts extend the lifetime of a product.Instead of throwing away a damaged product  to go into landfill we should spend some time working out whether these things can be repaired. While I know it’s harder in the age of built-in, or planned, obsolesence to repair some appliances I do believe we have a choice. We can choose to be consumers or repairers.

In our household we have recently experienced three of our appliances breaking down (well they say things always come in threes!).  A few months ago I managed to break the bobbin case in my sewing machine. This meant I couldn’t place the bobbin in the machine and so couldn’t sew. However after a brief search on Amazon I found a replacement bobbin case, ordered it and managed to replace it myself: 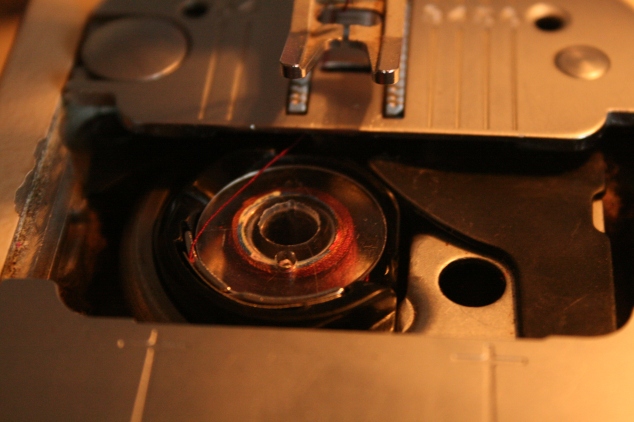 So I am now back to sewing (although the new bobbin case hasn’t improved my sewing skills!).

Then a couple of weeks ago the oven stopped working. I called out a repairman who told me it was something to do with the thermostat (or something like that). I could order a replacement part and he could fit it but it would cost £162 in total (to include labour and VAT). His attitude was one that is so prevalent: it would be more economical to buy a new cooker. Really? After a very quick search on the web the cheapest first-hand cooker I could find was over £400. While we were tied financially to taking the cheaper option to repair the oven, ethically this is what I believe we would have done even if we were flush with cash. The repairman duly came back to fit the part. He was a little surprised that we had decided to repair rather than consume but said that the part should now last for another six years.

And can you believe that in the same week that the oven broke the washing machine stopped working too!  Now I know that washing machines are not meant to last that long and we live in a very hard water area. Our machine is about eight years old and is the hardest working large appliance in our house. It washes clothes for a family of five on a near daily basis and, when the girls were young, also had the onerous task of washing a LOT of cloth nappies. I have a brilliant contact who repairs washing machines and dishwashers and when he last paid a visit to look at the machine a couple of years ago he did warn the drum had a limited lifespan. So I was expecting this to be the end. However he replaced the brush and for the cost of £69.50 the machine is now working fine! Thank you Mr Bath Washco! [Udate Feb 2015: the washing machine is still working!]

The washing machine in action

Now I am not professing to be an excellent repairer, nor can I say that I have never thrown away things and replaced them with new just because they are broken. I also believe there is another separate post to be written on how we place broken things on freecycle to ease our conscience when we buy new, rather than repairing.  Our recent experiences in mending broken things has given me a little boost and allowed me to feel good at taking control over whether I choose to replace and consume, or repair instead.